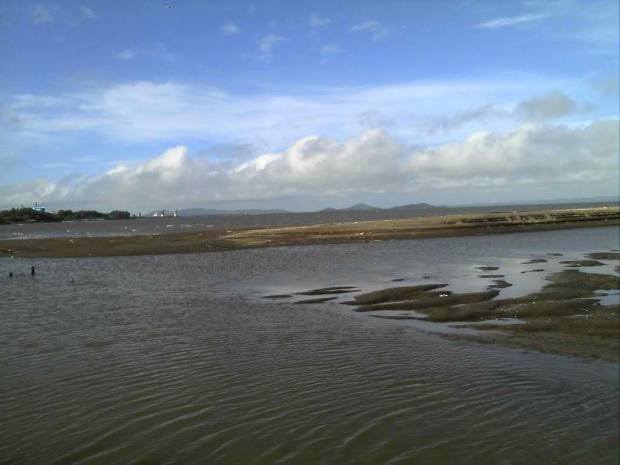 Last weekend, we headed south about 25 km from Bacolod. One of my brothers in law had contacted us about fresh live sea crabs for P250 per kilo. He helps his girlfriend operate her restaurant in a fisher folk village. They buy their seafood direct from fishermen. A number of people go to the restaurant because it has a good view of the sea and Guimaras Island, which looks like a large crocodile in the distance. They also have some of the cheapest prices for ice cold beer.

We left home in Bacolod around 1pm. When we arrived at the fishing village, the fisherman was just going out to check his crab nets in his motor boat. I got a cold one and watched the fisherman from a distance. He went out in his boat about 1 1/2 km and he began checking 8 or 10 crab nets he has. It took him a couple of hours to get his catch of crabs and re-bait his nets.

I also watched our son playing tag with two girls on the beach. They ran around for about an hour. One girl is about our son’s age and the other one was about 6 years old but she could run fast! We had to ask them to take a break long enough to drink bottled water. They were having a blast!

When the fisherman returned to shore, a number of children ran up to his boat to see what he had. A number of adults also walked out to take a look. He had a mess of crabs!

There were 6 of us and my wife boiled the crabs in the restaurant kitchen. She used the Zatarain’s Crab Boil that I took along. Everyone compliment the flavor of the craps that was enhanced by Zatarain’s, which is a little spicy. I had fresh boiled sweet corn with the crabs and others had rice, of course. I had forgotten to bring the Sweet Chili Sauce but the crabs were still very good. Others used coconut vinegar as dipping sauce for the crabs.

I really enjoy going to the fishing village on Sunday afternoons and we go as often as we can. My wife, our son and our best friend Randy also enjoy it. Randy has to drive back to Bacolod because it is usually dark when we return home. I do not drive at night.

We are friends with a number of people who live in and around the fishing village. I enjoy the atmosphere very much. Cool sea breeze and watching life going on with the Filipinos who live there. It is about as laid back as it comes! The people do not complain about anything and they are really happy every time we see them. They do not create cares or create worries that do not exist or fret over things they can never change. They have the wisdom to know the difference!

The people in the fishing village eat from the sea, they have free range chickens and there is always rice. There are a number of cashew trees right there in the village and many more coconut trees. The children do not spend hours with electronic gadgets but they know how to really play together. They create their own games. In my opinion, the people, young/old/middle age know how to really live and be happy. Their happiness is contagious to those who can really see and who are open minded. I already know this and I have for years. I only wish more expats and visiting foreigners can experience it.